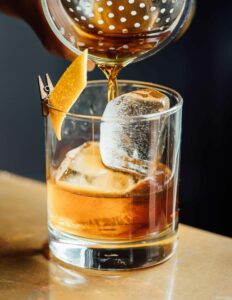 Art, the bartender at The Red Door, appeared and jolted Kane from his memories. “You okay, boss?”

“I’m fine, thanks. Do you know what happened to Stephanie?”

“Stephanie?” Art looked around as though the answer to Kane’s question, and perhaps all answers, could be found in the bar, the room where he spent the majority of his adult life, a room he knew better than any other, and the only life he’d ever known. His eyes landed on the hooker at the end of the bar, and he turned back to Kane. “You mean Celeste?”

“Life’s not for the squeamish.” Art gave Kane a look that didn’t try to hide disgust. “Everybody needs a little something to dull the pain. Some people need stronger medicine than others, but we all need the medicine. If we didn’t, I’d be out of business.”

Kane stared at the tumbler on the bar between his hands. “How did she get into the life?”

“By the time she came here, she was already in it, had been for years.” Art shrugged. “I know she drinks gin. Does that help?”

Help, Kane thought. What would help? “Sure, that helps. Thanks, Art.”

Art glanced toward the front door, and said, “Clyde’s here. Ask him.”

Clyde, Stephanie’s pimp, was a skinny man with bad teeth and tattoos that covered his arms, neck, and, presumably, a fair amount of his body hidden from the casual observer. Clyde’s face was narrow and long, his eyebrows scarred such that they appeared more like morse code than a curve continuously drawn. Despite the coarse nature of his appearance, Kane knew Clyde was a decent man, for a pimp.

Clyde slid onto the stool next to Kane. “Can I buy you a drink?”

“How are you doing, Clyde?”

Clyde lit a cigarette and offered the pack to Kane, who took one.

Clyde said, “I can’t complain. Are you going to give me a reason to?”

Clyde chuckled. “We don’t usually see you down here anymore. When was the last time you picked up the drop?”

“I know. Hell, everybody knows. The last time you picked up the drop, Bruno was alive and you worked for him. Now, you come down here, and you’re the man.”

“Somebody has to be.”

“Being honest, I never thought it would be you.”

Clyde tapped the end of the cigarette against the ridge of the ashtray.

Kane said, “You don’t know how to answer that question?”

Clyde shrugged. “I guess not.”

“That’s why I am where I am and you are where you are.”

Clyde nodded. “I guess it is.”

“Celeste is one of your girls?”

Clyde glanced in the mirror. Celeste sat by herself, smoking a cigarette with a gin and tonic in front of her. The man she’d been talking to had left, chased out the door by her affections, and she stared into the clear cocktail as though it held the possibility of a better future.

Clyde said, “She’s not the piece she once was, but she’s good people. I don’t think she’s worn out yet. This isn’t the hottest spot, but somebody needs to work it.”

Clyde cocked a snaggle toothed grin. “We all would.”

As a teenager, Kane had returned from St. Catherine’s most weekends. He’d buy a package, deal what he could at parties on the weekend, and bring the rest back to St. Catherine’s to sell to the boarding school blend of rich kids and troubled teens whose problems began with a lack of parenting and culminated in a lack of options, though nothing a torrential cash flow couldn’t overcome. Kane had seen Stephanie at the parties he’d worked. They’d flirted, but nothing had ever come of it. By then, Kane’s face had been burned, marked by ridged flesh in the shape of lips, like a kiss that would scar him for life. Kane remembered Stephanie’s eyes lingering on his cheek, and he’d backed away from her. They’d talked and joked, but he wouldn’t risk rejection.